LitPig is tickled pink to welcome Dr Suzanne Conboy-Hill to the blog today. Suzanne is a talented and imaginative writer, as well as being an all-round clever person ... read on to learn why ...

Dr Suzanne Conboy-Hill was a clinical psychologist for adults with intellectual disabilities for almost thirty years, working in NHS community services in London and Sussex. Latterly, as a writer of fiction, her observations of the impact of limited literacy on inclusion, communication, and exposure to the imaginings of others via written language led to thoughts about how that might be changed. This book is the result of one of those threads of thought. As a writer, she is a Lascaux Short Fiction Finalist, Flash Fiction Chronicles Finalist, and Best of the Net nominee. Her stories – some SF, some speculative, and some based in grim realism -  have been published by Zouch Magazine, Full of Crow, Fine Linen Literary Journal, and the Lascaux 2014 anthology amongst others. She lives in the UK, holds degrees in several specialist areas of psychology and an MA in Creative Writing from the university of Lancaster. Here is her website http://www.conboy-hill.co.uk/[1 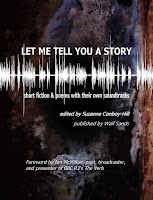 Q. When you first approached me about this concept I was really excited to know I was  going to be part of the first Readalongreads anthology. Can you tell us something about the project and your objectives for the anthology.
It goes right back to working with adults with intellectual disability whose literacy is often severely compromised. I’d spent a lot of time assessing people for decisional capacity or facing eviction or criminal prosecution for failing to adhere to written contracts they’d been given, and it was clear to me that while many of them could read the words at a technical level, their fluency was so impaired that meaning was non-existent. Sometimes sensitive and confidential material had been read to them by someone else which made it invasive and unsafe. I thought there had to be a better way.
At the same time, there was the problem of reading for fun. How do you make ‘adult literacy’ attractive when there’s no decent fiction aimed at people like yourself? It was obvious to me that people had a mental life that included imagination (and why would they not?) simply by the reality of having to keep up with the soaps myself so as not to get caught out in a re-enactment of a current storyline. I’d called an ambulance once for a young woman draped over the chairs looking pale and floppy only to hear of that exact scenario in the previous night’s EastEnders! People clearly wanted and enjoyed fiction.
The solution – or an approach to one – came with the ubiquity of smart phones, and the appearance of QR codes that could take you straight to a website without having to type in the address. I thought then about how a voice file that someone could listen to in private via their ear buds could support (not take the place of) reading and no one would be any the wiser about their difficulties. I thought too about adding voice files to the collections of short stories and poems some groups had already published but presumably could no longer access unless they could read. This was the basis of what was going to be a small demonstration booklet for local distribution and that became the anthology now sitting there on Amazon!
Q. What were the technical challenges for putting this together? How did you overcome them?
There weren’t as many of these as there could have been as I’d already published a couple of books via Lulu so I knew the ropes reasonably well. The main issue for me was re-publication rights, and securing a host site for the sound. I’d asked people to confirm that they had the rights to the work they wanted included, but there were some very last minute hiccups with a couple of contributions and so I wrote to all the publishers involved so there could be no doubt. If I do this again, that will be the very first priority! As to the sound files; I needed a host site I could control because, while SoundCloud is good, it runs tracks on one after the other and some aren’t even from your own list. This meant setting up something new and Readalongreads came into being; a place where I could also post updates and promotional material. There’s even a science page if anyone feels so inclined!
Q. Producing the anthology is only one part of the story. How are you promoting ‘Let Me Tell You a Story’? I believe you recently had a breakthrough with Lulu …
Yes! Bless ‘em, they wrote a little piece and put it out on LinkedIn and Facebook so I’ve taken a screenshot I can send out elsewhere. But promotion is surely the devil’s work? Like most writers, I’m not a natural seller so plugging via Facebook, twitter, blogs and the like is excruciating because I’m aware I’m shoving it at the same crowd all the time. Luckily, with an anthology there’s a range of contributors I can promote which makes it a little easier but it’s still quite limited in its scope. To maximise exposure, I’ve printed flyers that describe the book and link to Ian MacMillan’s Foreword (by QR of course!) and I’m sending these out to bookshops. I’m also sending copies of the book to libraries with the aim of eventually covering the country via key libraries in each county. The risk is they’ll bin it but I can hope they don’t, and if they have it there’s at least a fighting chance of it getting on the shelves. Then there’s reviews. I’m sending copies to some key ‘names’, plus literacy groups, psychology contacts, and the tech community because – pause for a trumpet blowing moment – I think this is a world first and I’d like to hear what those kinds of communities think about the QR/text idea itself as a support for literacy as well as an enhancer of the reading experience. Luckily, none of this needs to be done overnight so it can be drip-fed for as long as necessary.
Q. And what next for Readalong? Where would you like to see this initiative develop?
My ambition for this has always been to launch the technique and use the anthology as a reference. Getting the quality of content is a massive bonus and I can’t thank the contributors enough. Two of them have international standing: Phillippa Yaa de Villiers the commissioned poet for Commonwealth Day at Westminster Abbey in 2014 and Nguyen Phan Que Mai for the UN’s International Women’s Day event in 2016.
Thank you, Suzanne. And now here's the important details ...
You can buy the anthology Let Me Tell You a Story here and from Amazon here.
Find out more about Readalongreads here
Suzanne tweets: @strayficshion @demtigerpaw @GQinterview
Posted by TracyFells at 01:04