You will need to read on to find out why LitPig (left) is celebrating ... but first I'm going to quickly look back over 2018 and my writing year.

The first half of 2018 was quite mixed for me. I was struggling to write anything new. A handful of short stories and flash fiction emerged but I found few ideas turning into new pieces. Writing friends  encouraged me with their wise words and reassured that a fallow period was nothing to fear. It just meant something new and exciting was brewing. Have faith and the ideas would begin to surface.

I had an idea for a new novel and began planning it out during April and May. Using the excellent 'Structuring your novel' (along with the workbook and also 'Outlining your novel') by KM Welland I plotted the entire story. I made detailed notes, drew out a timeline on my whiteboard (it's still there) and jotted all the key scenes down onto index cards. I also did lots of thinking ...

But I didn't start writing ... I needed impetus, a trigger, to get it started. That came on 1 June, when after a seafront run I decided I was going to enter the 2018 Richard and Judy Search for a Bestseller competition. This was free to enter and for debut novelists who didn't have an agent or a publishing contract. One entry clause was the novel should not have been read by any literary agents, which ruled out all of my existing completed novels (unpublished but called in previously by agents). My only option was to enter something new ... Well, I had a new novel all planned - could I write the required opening of 10,000K words plus a synopsis before the deadline of 14 June? I can't resist a challenge and aimed to write a 1,000 words a day over 10 days.

Towards the end of June I learned that my entry THE OTHER SIDE OF HEAVEN was on the shortlist of 5 novels. All I had to do next was finish and submit it before the final deadline of 28 December. Gulp!

My short story collection was also called in by two agents and a publisher without success - and I had to stop submitting the collection or other novels once the R&J shortlist was announced. To me it feels as if I've achieved little this year for a full time writer, but that's because post June all my creative energy was focused on writing, researching and polishing the novel for the December deadline.

This Blog had a fabulous list of guests throughout 2018, what a talented bunch came on to talk about their writing projects including: poet Hannah Brockbank, and short fiction writers Gail Aldwin, Amanda Huggins, Catherine McNamara and Susmita Bhattacharya.

So why is LitPig celebrating with walnut whips and pink fizz?


I finished the novel.
And it's now been submitted. That is something to celebrate!

Whatever happens next I am very happy and proud of what I've achieved with the novel. I also couldn't have done it without the continuous moral and practical support from writing friends, and the belief of my family.

In January I will be meeting writing chum Wendy Clarke to discuss and set our 2019 Writing Goals. You can read about her writing year here - what a year she's had! Until the New Year I'd like to wish all followers and readers of this blog a happy and peaceful Christmas. As you can see LitPig is all set for the holidays ... 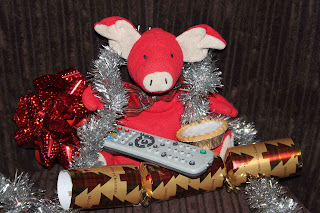