And then there were three: writing a historical trilogy with Richard Buxton

I’m delighted to welcome Richard Buxton back to the blog. He’s recently published the second novel in his Shire’s Union trilogy, a historical series set during the American Civil War featuring Englishman Shire. Now he’s working on the final book and shares his thoughts on writing a trilogy. I’ve been part of a workshop group with Richard sharing our writing since we completed our MAs and have been privileged to read/review Shire’s journey so far. I’m looking forward to the final book but also feel similar to Richard in that it will be tough not to have these characters in my life. 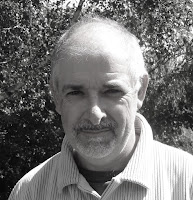 Richard lives with his family in the South Downs, Sussex, England. He competed an MA in Creative Writing at Chichester University in 2014. He has an abiding relationship with America, having studies
at Syracuse University, New York State, in the late eighties. His short stories have won the Exeter Story Prize, the Bedford International Writing Competition and the Nivalis Short Story Award.

Richard's first novel, Whirligig, was published in 2017 and shortlisted for the Rubery International Book Award. His second novel, The Copper Road, was released in July 2020.

Shire is far from home, his old life in Victorian England a fading memory. He's battled through war- 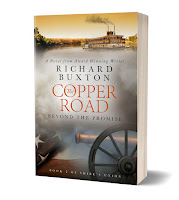 torn America to keep a cherished promise to his childhood companion. Now she’s pushing him away, while the war won’t let him go. Fighting for the Union, Shire must survive the brutal campaign for Atlanta and try to imagine a future without her.

Clara is free from her husband but not from his ghost. After a violent end to an abusive marriage, she struggles to keep her home in the Tennessee hills as the war steals away its treasures and its people.

Tod, a captured Rebel, escapes in Pennsylvania. His encounters on the long road back to his regiment cast the Civil War in a different light. He begins to question his will to fight.

Three young lives become wrapped in the Rebels’ desperate need for copper. Friendships, loyalty and love will be tested beyond breaking point. Shire has new promises to keep.

And Then There Were Three

There are different levels of commitment when it comes to writing in the long form. Claiming you’ve always wanted to write a book but can never find the time is no commitment at all. Starting a novel is laudable and impressive if you finish it. Casually announcing halfway through writing your first that it’s going to be a trilogy is just highly reckless. I fall into the latter category. It doesn’t help if you are ‘blessed’ with a stubborn streak, born to see things through at all costs. ‘Nothing pays off like persistence,’ a good friend once told me. I’ll let you know if that turns out to be true.

There are upsides, of course. I wouldn’t be without my own Shire’s Union trilogy based in the American Civil War composed of Whirligig, The Copper Road and Tigers in Blue (under construction). There’s a certain long-term comfort, a bit like knowing you’re not going to move house anytime soon. Much of the heavy lifting is done in the first book. Whatever your genre, you’ll have got your universe sorted out. Your characters are ready and waiting for the further books assuming you haven’t killed them off already. You’ve probably settled into your writing voice. If you’re really lucky you have a readership, or at least a favourite aunt, who is gently clawing at you for book two.

But there are also flipsides to the upsides. Let’s start with character and story arcs. Unless you are planning cliff-hanger endings to the early books - it works for Doctor Who but less so with novels – your characters are each going to need a satisfying arc that works for each book as well as one for the trilogy. This involves some major forward planning, or at least forward emoting. What images do you see for the last scene in the last book that are going to leave your aunt reaching for her hankie?

I’m about a quarter way through drafting my final book and realised early on that, as with book two, I needed to totally reassess my characters’ states of mind. How have they changed? Do they have new objectives or desires? This is more pronounced than in a longer series where the number of books extends towards infinity. Series have the option to be more formulaic and character development isn’t required to the same extent. With Bernard Cornwell’s enduring character Sharpe, for example, as a reader I was happy he turned up each time as the same up from the ranks, chip on his shoulder, next book next woman, battle frenzy soldier. In a trilogy, I’d argue, the character progression needs to be more evident from book to book.

I discussed trilogy structures with my good friend Phil Williams, a fellow West Sussex Writer and already with two dystopian and fantastical trilogies under his belt, the Estalia and Sunken City trilogies. ‘It’s possible,’ Phil says, 'to view a trilogy as a single story structure: book 1 as the call to action, book 2 as the rising action, and book 3 as the climax. But within each book there are smaller versions of that same structure for each contained tale.'

If you are a writer with modest experience, I’d suggest being careful with voice. No doubt you will want to develop and progress, you may have recently read a new author whose voice you really admire, but your aunt has expectations now. A sudden shift to first person, or trying to be more literary or more commercial is going to unbalance the trilogy.

Another big wrestle is how much help you may give to book 2 readers who didn’t trouble to open their purse to buy book 1. I decided against a ‘what’s gone before’ insert into The Copper Road. It felt like it would cheapen the trilogy somehow. Nevertheless, you will have to judge how much reminding you do on what has gone before. This is an art in itself. There’s already likely to be some degree of scene-setting early in book 2, so if you are ‘reminding’ as well, then there’s a huge risk that the pace will drop and auntie will have a flat read. The dynamics and pace of the individual books have to be paramount. I’m finding with book 3 that I’m putting in even less in the way of recaps. It’s on the cover. Book 3 of Shire’s Union. Your funeral!

If you think you have a trilogy on your hands, ask yourself why. Is it just that you always loved Lord of the Rings or is there some broader story that you are trying to tell where one book just won’t do? In my case, the history got hold of me and wouldn’t let go. I’d placed my English hero, Shire, in the 125th Ohio Infantry in Whirligig as there were so many first-hand accounts from the regiment. Their first active posting was in Franklin, Tennessee in 1863 and I dutifully went there to research. On a guided tour, in the basement of a farmhouse which became the epicentre of a climactic battle in late 1864, I discovered the longer heroic story of the regiment and knew I had to write a trilogy. Shire would have to fight his way to Chattanooga in Whirligig, towards Atlanta in The Copper Road but would come full circle in Tigers in Blue, back to Franklin, to complete his story.

The final trial will be to finish the last book, to say goodbye to characters that I’ve lived with these last several years. I’d not thought about that before writing this article and I begin to sense how emotional that will be. They have been constant, if silent, companions. Oh well, I’ll know where to find them if I need them.

Where to buy Richard's books:

eBooks for both novels will be on sale from the 4th to 11th of December. 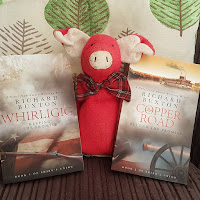 My review of THE COPPER ROAD:

Richard Buxton’s second novel in the Shire’s Union series is page turning quality historical fiction with a dash of romance. The Copper Road continues the story of a young Englishman, Shire, thrown unwittingly into the American Civil War and fighting for the Union. His fortune and fate is bound to his childhood friend, Clara, (the daughter of an English Duke). Clara faces her own battles in The Copper Road to protect her dead husband’s Southern estate from marauding gangs. Her unfulfilled love for Shire is tested when she meets Todd, an escaped Confederate prison-of-war, a man with a deep sense of justice and a passionate heart. How will Clara choose between two men, both her equals in intellect and compassion?

The Copper Road is beautifully written by a genuine storyteller. I was completely immersed in the setting and world of 19th century America, effortlessly brought to life by this accomplished writer. Along with the wonderful descriptions it was the interlaced story of the three main characters that kept me hooked and reading to the end. The Copper Road takes you on a cracking journey and will leave you aching to read the next installment.