Here is our special recipe for a literary summer fruit pudding.  ENJOY!

Luscious fat strawberries...
The House At Riverton (Kate Morton) is the book equivalent of a bowl of  strawberries.  Large and juicy but disappears quickly once you get stuck in.

An elderly lady in her nineties remembers when she first started as a housemaid at 14 years in the imposing Edwardian manor house at Riverton.  Her story tells of two sisters and their love for a Great War poet whose death lies at the heart of the tale.  A riveting read (sorry) ideal for hot sunny afternoons in the garden.  Good old fashioned story telling.


Ripe sweet blackberries...
White Crow (Marcus Sedgwick) is a modern gothic tale set in a crumbling seaside town.  A succulent story with a dark under-current as the memoirs of a eighteenth century vicar recount dark and evil deeds.  Two teenage girls become entwined in a frail friendship over the summer and tragedy waits patiently in the wings.  The short snappy chapters keep you reading on and you're soon over confident about predicting how it ends.  There is a twist.  Marcus keeps this the right side of gruesome, but always chilling and intriguing too. 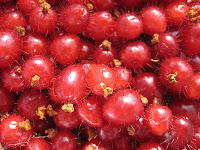 Tartly tantalising red currants...
Wereworld: Rise of the Wolf (Curtis Jobling) is the first book in the new Wereworld series.  Curtis Jobling is best known for being the creator of Bob the Builder (not joking!) but has now woven a whole new world of characters that you soon become addicted to.  This is more than another werewolf saga as the medieval style kingdoms are ruled by Werelords: men who can transform into all types of creatures such as lions, bears and even boars.  By the end of this story we genuinely cared about Drew Ferran (last of the werewolves) and his friends.  Looking forward to book two: Rage of Lions.

Rich ruby raspberries...
Out of Breath (Julie Myerson) is a tempting sumptious read lulling you into a daydream idyll of a perfect cottage beside a secret waterfall.  A cottage where whatever you wish for appears.  The narrator is a fourteen year old girl who begins to experience first love after meeting a group of runaways. Myerson's prose is quite intoxicating at times and lulls you into a summer daze, where you start to believe the daydream.  The blossoming feelings of the two teenagers is expertly drawn and believable.  At first the absence of speech marks is odd but you soon accept this and you begin to suspect all you are hearing is actually the creation of the narrator - you begin to live only inside her head.

Our only grumble was the rather weak ending.  In the final pages the story is sewn up quickly (almost sprints to the finish) and far too neatly for comfort.  But still the prose and story continue to haunt long after closing this book.  Looking forward to reading more of Myerson's work. 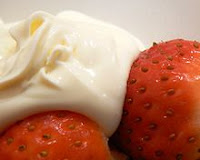 No summer pudding is complete without a good dollop of forbidden  cream... (this is the real stuff)
The Handmaid's Tale (Margaret Atwood) is a futuristic (though not too distant future!) story, which at times is scarily believable.  The narrator is a woman in her early thirties (we never learn her true name) a Handmaid known as Ofred (Of Red - all handmaidens take the name of their patriarch, a high ranking males in the Gilead society).  Her memories are recognisable to all modern women - she sounds like one of us but lives in a new society where women have become subjugated to men - to become breeding stock.  There is also a rich vein of dry humour that enthuses the writing skillfully merging horror, incredulity and farce into a narrative feast that you hungrily devour but don't want to finish.

What would you choose to put in your summer fruit pudding?  Let us know...
Posted by TracyFells at 09:04