On the 3rd day of Christmas my LitPig brought to me ...


TWO HOMER SAGAS
and
A BOX SET OF ROALD DAHL BOOKS
Each day I want to share the writing of an author that I read for the first time in 2011.   These are my personal choices - you may know many of them, but perhaps one or two will be new to you ... So why not try a new author in 2012.
March 2011:
SUSAN HILL - The Small Hand 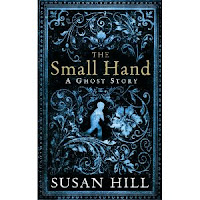 I read this ghost novella in almost one sitting.  The prose is elegantly simple, crisp and precise.  The atmosphere builds to a revelation ending, which though not traditionally scary leaves a chilly aftertaste.  I was stirred to read more of her ghost stories: The Man in the Picture, The Woman in Black (don't read this at night).  And plan to continue reading Susan Hill as I adore her succinct narrative style.  Many of her novellas are written in the first person and they read as if someone is right there telling you the tale.  The Woman in Black reads just like a nineteenth century novel, which takes great skill to pull off.  I'd seen a stage version and several TV versions of this book and had always assumed it had been written at the time of its setting, so was surprised to learn it was a relatively modern book.


Other novels by Susan Hill: