On 6th June the indoor writer was invited to attend the prize giving ceremony for the Steyning Festival Short Story Competition. Her short story had reached the final three and the awards would be announced and given out during the event. Below she shares her special day...

It was a day of sunshine and showers, but the South Downs gleamed lush and green as we drove up the mile long driveway to Wiston House. I'd been invited, plus guest, to the Steyning Festival Short Story Award luncheon and had no idea where in the top three slots my story had come. Wiston House (a sixteenth century Grade 1 listed building) sits in the shadow of Chanctonbury Ring (see photo above right) amongst 6,000 acres of parkland. The magnificent house (see photo above left) is owned by the Goring family and is now a conference/wedding/events centre. It is home to the Wilton Park conference organisation, which was first created in 1946, inspired by Winston Churchill, to help re-establish peace and democracy in Europe after WWII.
At 11.30am we were ushered into chair-filled room for the reading of the winning stories. Sara Bowers (owner of Steyning Bookshop) led the proceedings and local novelists read the stories. The children's competition entries were read first and the prizes awarded. The two stories were of an exceptionally high standard - clearly writers of the future. Sara explained that the competition judge Simon Brett, acclaimed crime novelist, scriptwriter (he wrote the 'After Henry' radio series) and patron of West Sussex Writers, had read ALL the entries himself before selecting the top 3 and 2 highly commended. An admirable feat for any writing competition judge!
The three stories were then read out - and still we didn't know the placing. Brighton crime novelist Elly Griffiths read my entry. It was both enthralling and deeply embarrassing to hear the words I'd written read aloud by a professional - even though nobody around us knew I was the author. As I listened to her reading it really didn't seem like my story at all, it was transformed. All of the room listened quietly and their applause seemed to show pleasure, but as it was my creation I couldn't detach myself sufficiently from the experience to judge. This was such a powerful and wonderful moment that I wish I could replay it over and over (particularly when another rejection pings into my mail box).

Simon Brett then stood and began to critique the stories in turn. Finally reality dawned, as he worked through the stories in order, that as mine was read last then it was the winner. I gripped hubby and whispered: 'I think I've won'. After that it becomes a blur. I stepped up to receive my winning cheque from Simon (see photo above right) and talked with him and the other readers. Several people came to congratulate me and I can't remember a thing I said to any of them, other than thank-you of course! 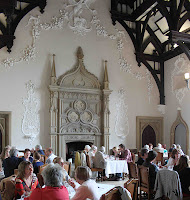 We all moved through to the Great Hall (see photo left) for the excellent two-course lunch. A group of us from West Sussex Writers sat took up one of the centre tables, but again I was still mostly floating amongst the clouds at this point. After lunch I chatted a while with the lovely Elly Griffiths and then explored the still dripping gardens with hubby (my official photographer).
The whole day was a delightful treat and a memory I shall treasure for a long, long time. The prize is the biggest I've won to date and I still haven't decided what to spend the money on.
Posted by TracyFells at 01:17