Before the Fall by Juliet West

I'm delighted to welcome Juliet to the blog today to talk about her debut novel ...

Juliet West’s debut novel Before the Fall is described as a ‘compelling, moving tale of a love affair, set in the East End during World War One and based on an unforgettable real life story’. And yet it is so much more.
When my proof copy first arrived a terrifying thought sprang to mind: what if I hated it? What if I couldn’t finish it? Suddenly reviewing a friend’s debut novel wasn’t such a good idea. But then I started reading and all these silly fears dissipated before I’d turned the first page. I was gripped by Hannah’s voice and story, reading the whole book over a couple of days.

The novel weaves between Hannah’s narrative (first person) and Daniel’s story (third). It was the genuine voices of the main characters that hooked me. They are complex and intelligent, yet both outsiders not really ‘fitting’ in with their working class friends and family. Hannah is struggling to find any meaning in her life. Her husband volunteered early for the army leaving her and their two children to live with Hannah’s sister. Daniel has a protected job in London’s dockyard so hasn’t been called up. Being a fit young man he’s the target of malicious gossip and the white feather brigade. The two outsiders are inevitably drawn to each other, with tragic consequences. I don’t want to give anything away, but I finished this book with tears running down my face. The story seems even more poignant when you learn it’s based on a real story – more on this in Juliet’s interview below.

Juliet’s writing has the same melancholic and haunting atmosphere of Helen Dunmore. Honest storytelling, lyrical yet fluid and so readable. If you enjoy Dunmore’s novels then I think you’ll love Before the Fall.

Here is an excerpt: “ I think the war is everywhere in the rain, in the river, in the grey air that we breathe. It is a current that runs through all of us. You can’t escape the current; either you swim with it, or you go under.”

I’m sure you’ve guessed, but I highly recommend this novel. And if you’re already suffering WW1 overload then please don’t overlook this novel. It is intriguing to hear the stories of those who endured the Great War at home. I found it refreshing to read about the war from a domestic perspective. 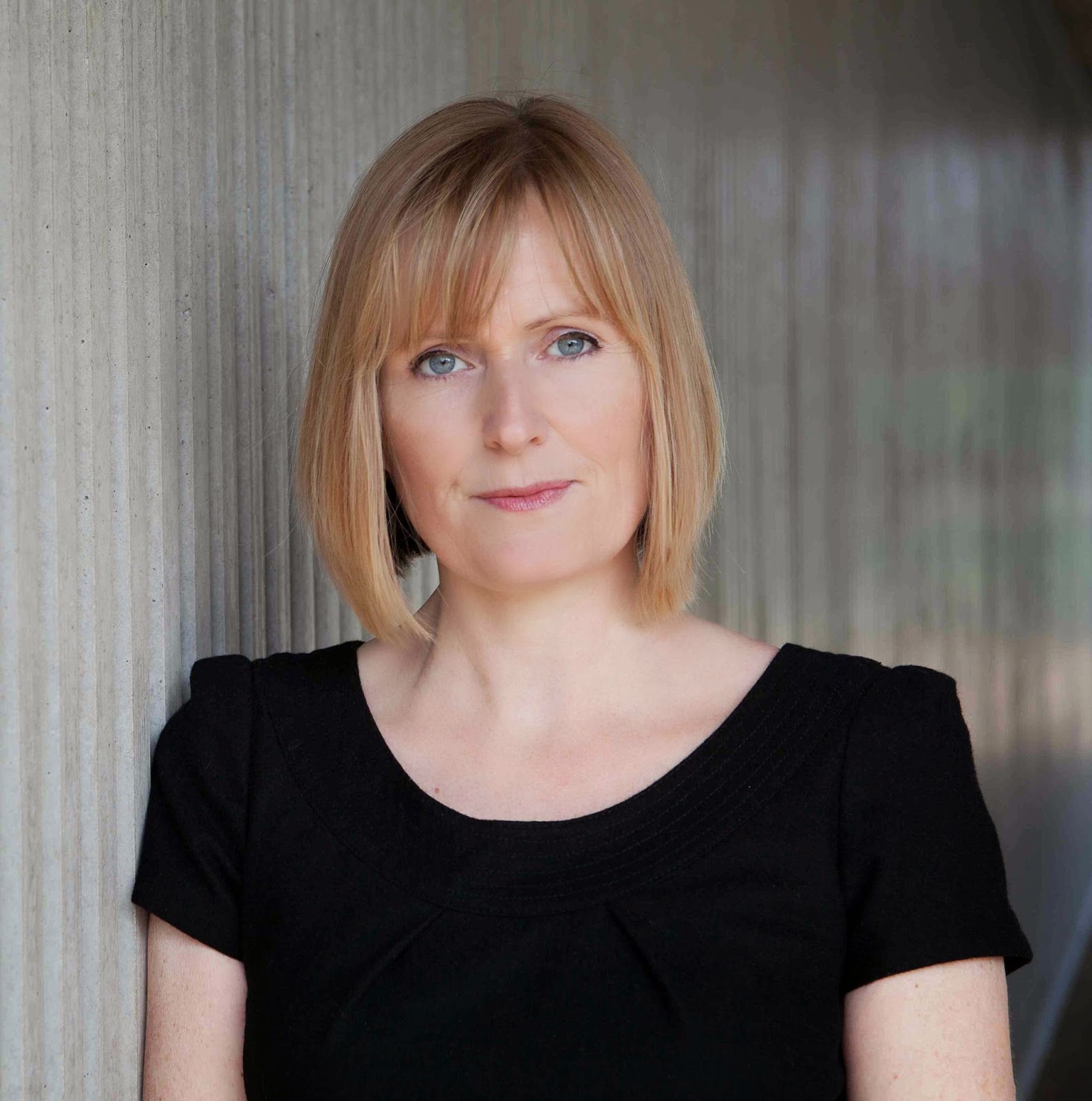 Juliet West worked as a journalist before taking an MA in Creative Writing at Chichester University. Her poetry and short stories have been published in various magazines and anthologies including The French Literary Review, Ink, Sweat and Tears, and The Sunday Times online magazine. Juliet’s debut novel, ‘Before the Fall’, is published on May 22nd 2014 by Mantle/Macmillan. She lives in West Sussex with her husband and three children.

Q:  Hannah and Daniel are complex main characters, but come across as very real to the reader. I also understand Before the Fall is based on a true story. Can you tell us more about the background to the novel - without giving too much away of course. How did you first come across the story?
I first heard about this story nearly eighteen years ago when I was working as a newspaper journalist in London. During the First World War, a young soldier’s wife had fallen in love with another man while her husband was abroad fighting. Their affair ended dramatically in 1918, leading to a murder trial at the Old Bailey. Police and court documents relating to the case had been released by the Public Record Office in Kew, and I co-wrote a feature which appeared in January 1997 under the headline: ‘A soldier at the Front, a wife at home and a tragic betrayal’.

The story was so poignant and shocking – it haunted me for years, and I really wanted to explore it in more depth. But it wasn’t until 2010 that I finally started to research and write the novel.

I should mention that ‘Before the Fall’ is a fictionalized version of the story, and that the names Hannah and Daniel are not the real names of the people involved. Although I remained very true to the key events, I did invent a wider cast of characters in order to create believable worlds for Hannah and Daniel. So characters such as Hannah’s best friend Dor, Daniel’s landlady Mrs Browne and his neighbour Sonia are all fictitious.
Q: I was intrigued to learn from the novel that London had been bombed by German Zeppelins and planes during WW1, air raids are something you associate with WW2. Before the Fall is distinctly set in the Eastend of London where Hannah lives and you've captured the setting and people so well. How much research did you undertake for the novel? Can you share some of your research process, for example did you do all the research before you began writing?
Initially I was very daunted by the prospect of research. I’d studied history at university, yet I’d never attempted to write historical fiction and hadn’t a clue where to begin.

In the end, my approach was unsystematic (polite way of saying ‘chaotic’). I researched as I wrote, usually from home, reading history books, biographies, memoirs and browsing countless World War One sites on the internet. I also had several field trips to the East End, especially around Docklands and Whitechapel, walking the streets and visiting local history archives and museums. In fact the research wasn’t a burden at all. I absolutely loved it and found myself more and more fascinated by the period.

Of course the difficulty of becoming immersed in another world is that you end up with so much material that it’s hard to know what to leave out. I wanted to avoid the clichés of rattling trams and flickering gas lamps, but ultimately these were very much part of the London landscape one hundred years ago, so the odd tram has crept in…
Q: You read a beautiful but poignant poem at a recent poetry event and I know you enjoy writing poetry. As well as working on novels can you tell us more about other writing projects and successes.
Thank you, Tracy, I’m glad you enjoyed that poem. I do love reading, writing and discussing poetry, and a couple of my poems have been published. However I’d hesitate to call myself a ‘proper’ poet. One day I’d like to study poetry in greater depth – I want to know about spondees and anapests! - but for now I just dabble when the mood takes me. I probably write only two or three poems a year. Must do better.

While I was studying for my MA in Creative Writing (at Chichester University), I concentrated on short stories and started submitting to competitions. For ages I didn’t have any luck, and then my short story ‘Beauty in the Bog’ won the H E Bates prize and went on to be published in the Sunday Times online magazine. This was a massive confidence boost. I’d definitely encourage other writers to submit to competitions. If a story isn’t placed, don’t lose heart or take it personally. Toughen up, tweak, and re-submit!
Q: I believe you have a 2-book deal with Macmillan. Now Before the Fall is out in the shops are you working on book 2. Can you tell us anything about it and when it will also be available?
Book 2 is another historical novel, but the setting and the characters are very different to ‘Before the Fall’. This book is set in Sussex and London during the summer of 1935. It’s about love and family loyalty, set against the political backdrop of this era. It’s not a war novel, but certainly the legacy of the First World War, and the fear of a future conflict, are relevant to this book.

I hope to complete the first draft by the end of this year, but I don’t want to jinx my progress by suggesting a publication date!
Q: Finally, Juliet, if, or should I say when, Before the Fall is optioned for film or TV who would you choose to play Hannah and Daniel? If you could have a part then which character would you like to play?
Ha, you never know! It’s a difficult question to answer, though. Because I’d seen a photograph of the real-life Hannah, this was the only face I pictured when I wrote the book. She was a petite woman with beautiful wide eyes and dark hair. Audrey Hepburn circa 1953 is the closest I can get.

I have no idea what real Daniel looked like - the only description is that he was a tall, broad man. But I’m sure he must have been very attractive for Hannah to have fallen for him, given everything that was at stake. Jon Hamm with a Cockney accent, perhaps?

As for which character I’d play, this is even trickier as I haven’t acted since I was about twelve (in a school assembly - a Coronation Street spoof, in which I played Deirdre Barlow). Probably I would be the café owner, Mrs Stephens, grimly chopping onions in the kitchen. 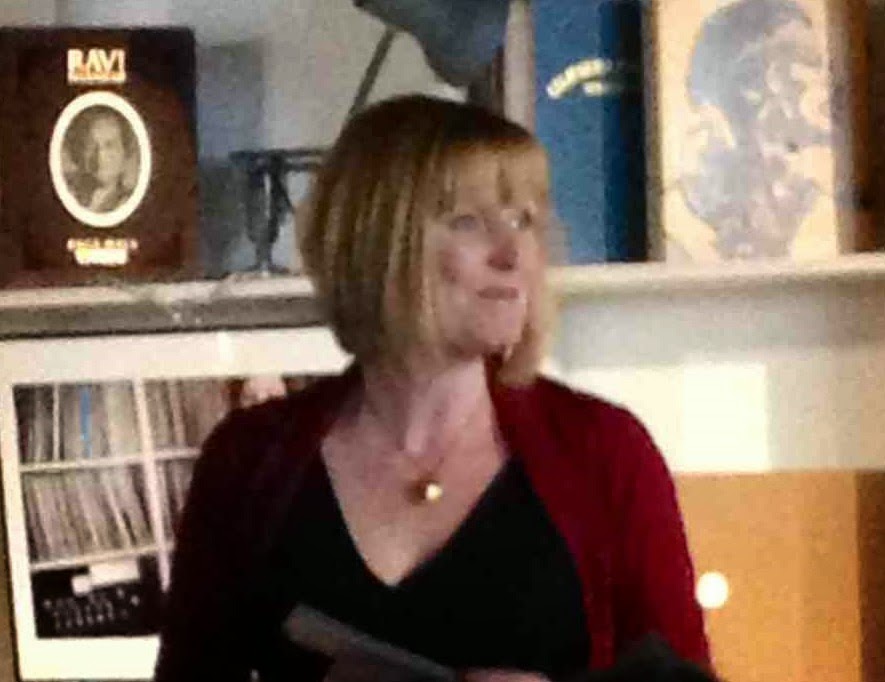 Thank you, Juliet for stopping by today. Hope you are recovering after the launch party yesterday - it was a great "do" and a terrific venue for a book launch (The Library at The Proud Archivist, Haggerston)
Top right photo:  Juliet giving her speech
Bottom right photo: Juliet and Tracy with a copy of the book! 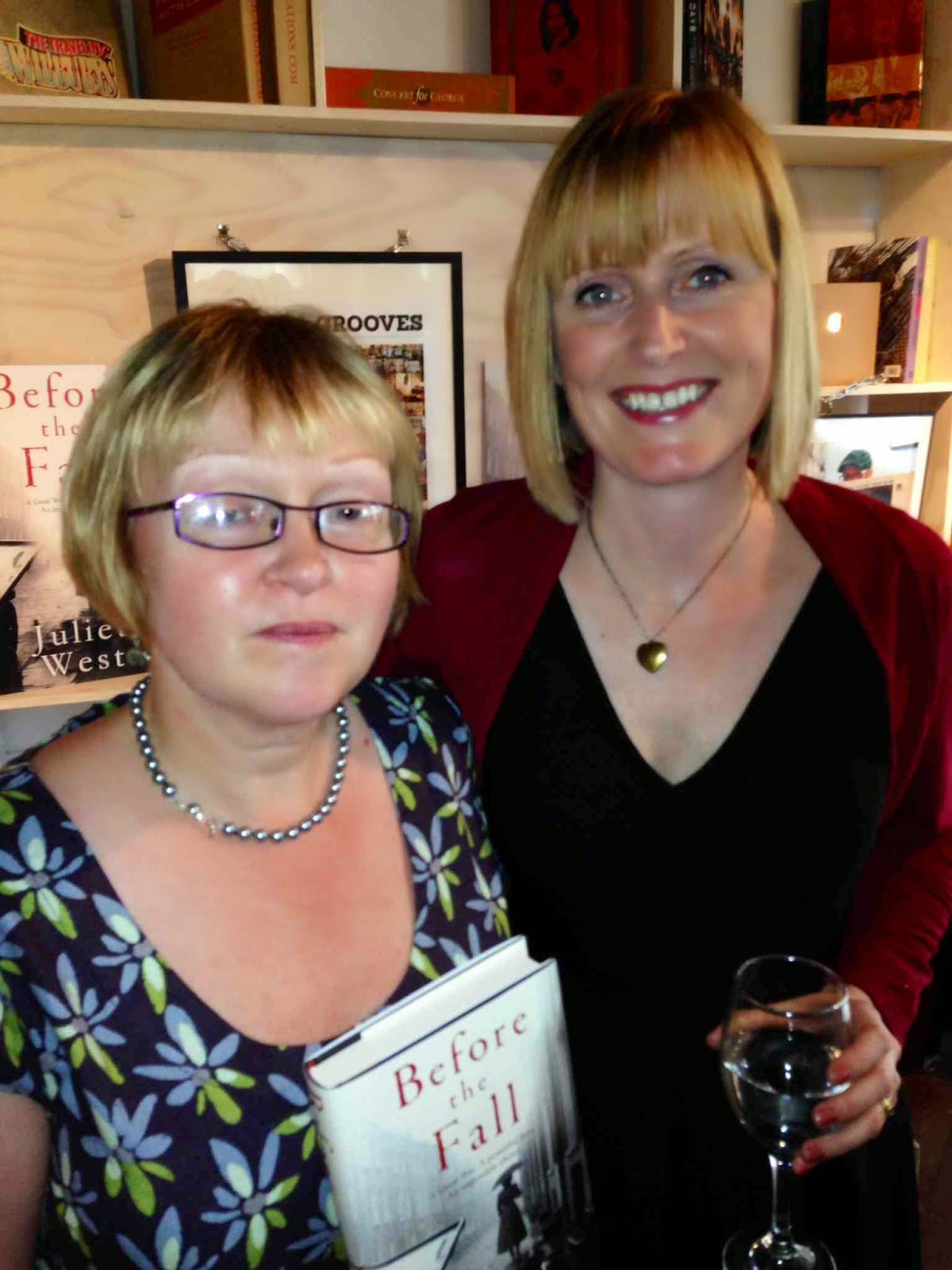 .....
Finally, here are some links to where you can buy Before the Fall
Waterstones
Amazon
Macmillan

Wishing Juliet every success and many sales for Before the Fall. It deserves to do well!