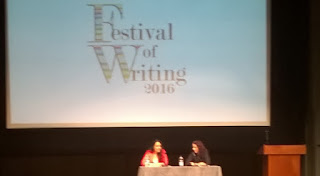 This summer I've been busy finishing and editing a second novel (a crime mystery), I also found time to squeeze in a couple of writing events: Winchester Writer's Conference and the Festival of Writing (FoW) in York. The photo above shows a tiny Joanna Cannon (in red) giving her concluding speech at FoW, which was incredibly honest and motivating. Jo Cannon famously won the Friday Night Live event at FoW in 2014, following which she was offered representation by seven agents. She chose  Susan Armstrong (Conville and Walsh) and this year her bestselling debut 'The Trouble with Goats and Sheep' was published by Borough Press.

I didn't attend the whole of the Winchester weekend but did travel down for the Friday Masterclass and had two 1-2-1s (an agent and a commissioning editor). Madeleine Milburn's Masterclass on 'Pitching' was excellent. I didn't think there was much more I could learn about this process and boy was I wrong. Madeleine led some excellent exercises and used real examples throughout - these were the most valuable part of the day. If you ever get the chance to hear Madeleine talk then grab it, she knows the business inside out and is also rather lovely too.

Several writing friends had shared that the York held Festival of Writing was THE event to attend if you were seriously seeking an agent. I saved up the pennies and bought a weekend ticket for all events and two 1-2-1s. I also paid for an additional 1-2-1 meeting with a book doctor (a professional editor). I won't dwell on the train journey to York (it took >7hours!) but thankfully I arrived in time for dinner and Friday Night Live. The weekend was a whirlwind of talks/workshops/1-2-1s and lots of socialising/networking with other writers. I did need several days on my own when I got back - just to quieten my head. I considered the cost and investment in my writing career and I think it has been worth it. It was lovely to catch up with some writing pals and also meet new friends too - some of whom I think will be the names of the future. The quality of speakers and workshops/panels etc were excellent. The accommodation was basic student rooms but you don't spend much time there anyway. I was impressed by the overall organisation, friendliness of the event and the food was pretty good considering there were >400 delegates. I took advantage of the free competitions running for the weekend and was delighted to be shortlisted (final 7) for the Best Opening Chapter competition, which got my name read out during the Gala Dinner on Saturday night.

Both events are expensive but the included 1-2-1s are worth the cost - a 10-15 min opportunity to get face-to-face feedback on your writing from industry experts. These offer the chance to meet agents, making it so much easier to then approach by email or sidle up to them in the buffet/bar queue. Also look out for Early Bird Rates. When registration opens for FoW there is usually a short period when you can get a 20% discount.


What I gained from these events
I pitched two novels: literary and crime mystery at 1-2-1s at both these events. Discussing my literary novel with a book doctor I realised it is probably time to 'rest' it from the submission carousel. The editor was enthusiastic about my writing (immersive and transports the reader), she 'got' it and my aims, but suggested it was unlikely to attract an agent seeking a commercial debut because it's just too gentle and quiet. This matched much of the feedback I'd been getting from agents. From the annotations on my extract I also realised what to expect when working with a professional editor.  I thought I'd sent her a near perfect, polished piece and yet she'd commented on several areas on page 1 alone. Scary.

The crime novel has been a delight to write, almost fun (if you can ever call writing fun) and a different experience for me as I purposely set out to write a more commercial novel. Over the spring and summer I've pitched this novel to a number of agents and to date every one has asked to read the finished manuscript. That's a 100% hit rate. Tweeting about how the novel also attracted attention and I was approached directly by an agent who after reading the opening has called in the whole manuscript. So you can see why I'm turning to crime ...


What do you think about writing conferences? Have you found them useful / value for money? Let me know what you think.