Happy New Year to all followers! I hope 2017 has started well for you. LitPig has a feeling in his trotters that 2017 is going to shine brightly for us all. I'm still pondering on writing goals for this year and to be honest I can't commit to anything until I've met Wendy for our first planning session, which is an annual tradition I look forward to. But before setting out new goals it's wise to revisit the year just passed. I've focused on five topics for 2016 ...
1. The year of two novels
I started and finished first draft of my new crime mystery novel (with a supernatural edge) within 6 months, then went on to complete re-writes and edits before the end of the year. A number of literary agents have called in the manuscript, but I've yet to receive a positive offer. The same novel was shortlisted for the Festival of Writing (FOW) Best Opening Chapter competition and also reached the final stages for Flash 500 Novel competition. I also sought advice on my first novel (contemporary upmarket fiction) from a book doctor (editor) at the FOW. She 'got' the novel and made some very positive comments on my writing, yet suggested as it was a 'quiet' novel it was unlikely to attract the attention of an agent seeking a commercial debut. Consequently, I've decided to rest the first novel and focus on securing a deal for the crime novel. Let's see what I can achieve in 2017 ...
2. Queen of the shortlists
From my tracking spreadsheet I've counted up 67 writing competitions entered (13 still being judged), some were FREE to enter but many required an entry fee. I did make the podium for several competitions earning a total of £180, which didn't cover the costs. However, I came very close and feel I deserve to be crowned Queen of the Shortlists for 2016. Here's a sample of shortlists I made it on to: HE Bates, Soundworks audio Play, Exeter Story Prize, Brighton Prize, Words With Jam, National Flash Fiction Day Micro and the Willesden Herald Prize. I failed to get anywhere with: Bridport, Bristol, Bath or Bedford competitions, so maybe in future I need to avoid any beginning with B. I was delighted to make the long list for Thresholds Feature competition (essay on Roald Dahl's collection The Umbrella).

3. Publications
For once I earned more from sales of short stories to magazines/anthologies than from competition prizes. One top moment was seeing my story Footprints (with an original illustration) in Popshot magazine (read more here). Other stories have been published in Willesden Herald New Short Stories 9, A box of stars beneath the bed, Rattle Tales 4, Day of the Dead (Black Pear Press) and Take-a-break Fiction Feast. I was very pleased to be part of Suzanne Conboy-Hill's initiative Let me tell you a story - you can read more here.
4. Outings with writers
After completing my MA in Creative Writing I wanted to continue investing in my writing education and decided one way was to attend as many events as I could. The wonderful benefit of this is meeting new writers and in 2016 my circle of writing friends has expanded to include some lovely and talented people. I realise that I'm now keeping in touch with writers I met from every event I attended, which included: Paul McVeigh's Killer First Chapter Workshop, The Beach Hut Writing Academy's Write on the Beach conference (read more), Winchester Writers' Conference, Festival of Writing, Lewes Short Story Club, Vanessa Gebbie's short story workshop at Railway Land (read more). I also read at Rattle Tales back in February and got to the prize giving events for Brighton Prize (oodles of bubbly!) and Willesden Herald Prize. A real treat was the 1-day Masterclass in Advanced Structure with John Yorke at the London Screenwriter's Festival (read more). Every quarter I try and get to Melanie Whipman's Live Lit events in Surrey (read more), where there's always a great bunch of people eager to hear short stories/flash/novel extracts and poetry read aloud by the authors. And I got to meet a virtual friend for real in beautiful Bath - read more here.
5. Academia

Last but not least I graduated (with Distinction) from Chichester University with an MA in Creative Writing. And I count my blessings every month when I get together with my workshop group - I met them all on my MA. 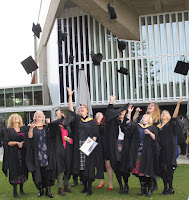 What are you proud of achieving in 2016? Please share, we all love to hear good news and success stories.
Posted by TracyFells at 08:17