Tomorrow I'll be meeting my writing buddy, Wendy, to review how we performed against our goals for 2017 and to set new targets for 2018. Yes, teacakes will be involved. You can read about Wendy's writing year here. For me 2017 has been a true rollercoaster year with some spectacular highs, along with a deep, dark low. The low was a personal one when my mum died suddenly in February. I'm still processing that loss and her passing has triggered some difficult emotions and memories, along with extreme anxiety at times. But this is a writing blog and I'll focus on what I achieved in 2017 ...

For the geeks here are the stats:
Short stories written = 4
Flash stories written = 6
Features written = 2
1 new novel started
Crime novel was called in by 6 literary agents but sadly no offers (and very little feedback as to why...)
I was also commissioned to prepare and lead two writing workshops: one on writing for competitions and the other on micro fiction. Both were successful with a good turnout.
Competitions entered = 42 requiring fees, 21 free entry
Submissions to magazines/anthologies/online opportunities = 22
Income = >4 times what I earned in 2016, it has been a very good year for getting paid to write! However, I am still a long (long) way off paying income tax, which is my ultimate goal (albeit an odd one!).

Here are some of the places my work was published in 2017:
Granta
Thresholds Short Story Forum
Writing Magazine
Take-a-Break magazine
Spelk
50 Word Stories
Reflex Fiction
In the Moment magazine
Flash Fiction Festival Anthology ONE
Brighton Prize Anthology
I YOU HE SHE IT Experiments in Viewpoint anthology (Huddersfield University)
Paragraph Planet

The Prosecco and Walnut Whips came out for the following successes:
Regional Winner (Canada & Europe) Commonwealth Short Story Prize, which included publication on Granta (links below in A-Z), £2,500 prize and an all expenses paid trip to Singapore for the prize giving. It was the high point of my year and of my writing career to date. Writing Magazine also published my 2-page article on winning the prize.
Other paid wins/placements included:
Runner-up Retreat West themed flash comps x2
2nd Prize GRIST Point-of-View comp
2nd Prize Flash500
3rd Prize Reflex Fiction Autumn Flash comp
Story of the month on 50 word stories

Looking back at these stats makes me realise what a good year it has been. Odd, because I felt it was a bit of a wasted time as I hadn't written as much as previous years. Much of my success/publications came from work written before 2017, which demonstrates the 3 P's of writing: Persistence, Patience and Positive thinking. So I'm hoping new fiction written in 2017 will start to prosper and find good homes in 2018 (and beyond). I'm also really fired up to write new fiction: long, short and perhaps even some drama. 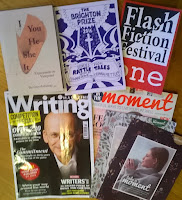 Finally, I looked over the stories published in 2017 and animals feature in many so I thought I'd end with a brief A-Z of animal themed stories that came out last year.


Did you achieve your writing goals for 2017? What new writing projects do you want to start in 2018? Please share ... and KEEP WRITING