When you first start writing it's best to learn the rules and try to stick to them. Experimentation can come later when you feel more confident. That was my own approach to writing. I also have several golden rules that I stick to ... but then rules are there to be broken, aren't they (I'm sure someone very wise said that).
This weekend I traveled to Bristol for the Flash Fiction Festival at Trinity College. If you write or read flash or are interested in learning more about flash fiction then this is THE annual event to get to - I highly recommend you follow @FlashFictFest on Twitter to find out about events and the 2019 festival, and get your place booked early! This year's festival was wonderful: great workshops with very experienced flash writers, lots of time for networking (ie chatting/gossiping), opportunities for Open Mic, mini competitions, terrific food, a well stocked bookshop (note to self: take more cash next year!) and oodles of time for socialising. I wish I'd had Hermione's time twisting necklace (Harry Potter and the Prisoner of Azkaban) as each session I could have signed up for several simultaneous workshops. Here's a flavour of the tutors: Meg Pokrass, Jude Higgins, Vanessa Gebbie, Nancy Stohlman, KM Elkes, David Gaffney, Michael Loveday, Carrie Etter, Christopher Allen, Ingrid Jendrzejewski, Nuala O'Connor, Haleh Agar, Santino Prinzi and so many others. Basically the Stars of Flash Fiction were at this Festival. Writers had traveled from the US and Australia for the Festival, as well as coming from Ireland and all over the UK. It felt truly international, yet still like meeting up with old friends. I met some lovely new friends too and several of my heroes of flash fiction. 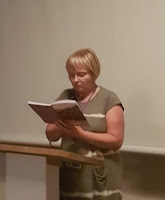 Over the weekend I broke two of my golden rules, as follows:
Never read after drinking alcohol. (See photo opposite, in which I look deadly serious. Photo by Debbi Voisey).
Another writer 'encouraged' me to sign up for the Open Mic readings on Friday night. By then I had drunk at least half a bottle of Prosecco. Maybe this was a rule that needed breaking ...

The second golden rule is not a writing one but since I was in the company of writers ...
Never (ever) do Karaoke.
By this time I had polished off the bottle of Prosecco and possibly started another ... I sang Human League's Electric Dreams (my favourite song of all time) along with Debbi Voisey.
I wish I could say never again, but actually I think I may have enjoyed breaking this rule.

Finally, another golden writing rule was:
Don't write a first draft just before a competition deadline and submit without anyone reviewing.
I broke this at the beginning of June when I wrote the opening 10K words of a new novel, then a synopsis and finally entered it into the 2018 Richard and Judy Search for a Bestseller competition (for debut novelists).
If you read this link to Richard and Judy's Bookclub website you'll learn that sometimes it really is okay to break your own rules.
Now I have to finish the novel and submit before 28 December. I'd better get writing then ...