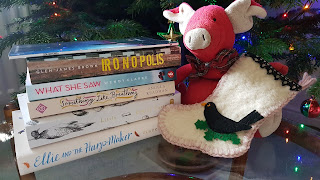 LitPig is getting ready for Christmas and planning his stocking fillers. If you're anything like me then your Christmas wish-list is packed with books (and chocolate). To help you choose some stocking fillers here are the top 6 books I've read and loved in 2019 (in no particular order): 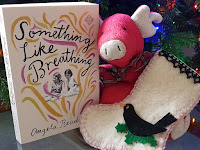 Something Like Breathing by Angela Readman:
I have been a fan of Angela Readman's short stories for several years, I love her writing voice and was excited to learn of her debut novel 'Something like Breathing.' Readman's quietly beautiful writing translates perfectly to the longer form of a novel. I was soon immersed in the lives of the two narrators, Lorrie and Sylvie (the story runs from 1957 to 1960) on their remote Scottish island. This is the story of their friendship and Sylvie's unusual gift. How exactly Sylvie is special is slowly revealed. Readman does not deal in glitzy tricks or twists and character is everything in this novel. I fell in love with the gentle and very wise soul of Sylvie and I didn't want it to end. I'm still thinking of the two girls ... Lorrie was a force to be reckoned with but I'm fretful for Sylvie let loose in a manipulative world - though she'd clearly inherited her mother's resilience and backbone. I'd love to know what happened next for both of them ...

Ellie and the Harp Maker by Hazel Prior:
All the blurb about this novel is true. It is a heartwarming, engaging, uplifting story about love and friendship. It will also make you smile (a lot) and cry (a lot - but in a good way). I quickly fell in love with Ellie and Dan, the main characters and voices, and felt bereft when I finished reading. I could happily spend many more hours in their company, along with Phineas the pheasant.
This book brought me comfort at a difficult time. It is gentle, written with love and understanding. This has jumped into my top ten of favourite reads, it is a book I will return to again and again. 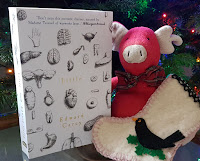 Little by Edward Carey:
This is an extraordinary novel. Beautifully written and incredibly atmospheric. I was soon immersed in 18th Century Paris and completely absorbed by the narrator's story. Marie 'Little'(later to become Madame Tussaud) is the most wonderful literary creation, her voice still lingers with me: naive and yet strong and determined. This charts the early life of Little as she learns to create wax models from her very odd mentor in Paris. We learn about life at Versailles (she slept in a cupboard), her obsession with the King's sister and ultimately how Little survived the turbulent years of the French revolution.
Carey's language and story carried me through this almost dream like novel, and his own illustrations make it something very special indeed. This is going into my top ten of favourite all-time books.

What She Saw by Wendy Clarke: 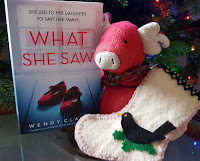 This is the terrific debut thriller from Wendy Clarke that kept me absorbed to the end and ticked so many boxes: super twists, page-turning story, characters you care about and a Lake District setting. Quality writing that quickly hooked me in, I read this almost in one sitting. 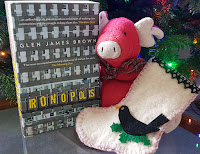 Ironopolis by Glen James Brown:
This was the most intriguing and unusual book I've read in a long time. Glen James Brown is an excellent storyteller who's characters are unique creations, authentic working class voices drawing you into the dark and at times sinister world of Ironopolis. Ultimately this is Alan's story as he searches for the truth of his father. We become immersed in the community over three generations as the Middlesborough inner city housing estate begins to fade and decay, along with its inhabitants. Jean (Alan's mum) writes her story in letters to a stranger. Henry is the strangely attractive mobile librarian with a  disturbing secret. Alan hunts down what happened on the Day of the Dark, and the New Year Eve's bomb explosion by meeting the misfits and outsiders (like himself) who are trying to make sense of their lives. Throughout the stories the mystical Peg Powler haunts the river and pipes, a creature conjured to scare young children she seems to have been a reality for several characters.
This novel weaves between black humour, horror and a gripping story line that makes you want to keep reading. There is a brooding oppressive darkness that pervades Ironopolis and it will follow you long after finishing.  An atmospheric debut from talented writer Glen James Brown. 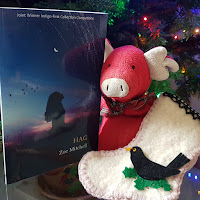 HAG, a poetry collection by Zoe Mitchell:
If you love mythology, folklore and ancient history then I highly recommend HAG by Zoe Mitchell. Her poetry is infused with energy and jumps off the page. The writing is equally vivid, visceral and incredibly lyrical. Her classical knowledge is woven seamlessly with the everyday, her characters will linger in your dreams and often inspire you to go search out more details on what lies behind their stories. The natural world appears in several poems, one of my particular favourites is ‘Sycamore Gap’ featuring an argument between the famous sycamore and Hadrian's Wall. ‘Lullaby’ really is the stuff of nightmares and ‘A Matter of Common Talk’ will make you either laugh out loud or cringe (depending on your gender). There are goddesses, Ancient Britons, lovers and the lovelorn, along with the forgotten voices of women doomed for simply being women. Once read and devoured, then this collection is one to read again and out loud so you can savour the delicious rhythms and joy of words that Mitchell has crafted.

You can read more about the creation of Zoe Mitchell's debut poetry collection here.