The House on the Corner by Alison Woodhouse

I’m excited to welcome Alison Woodhouse to chat with us today about her debut ‘The House on the Corner’ (published by Ad Hoc Fiction). ‘The House on the Corner’ is a novella-in-flash, which is still a new form and perhaps is unknown to many of you. I’ve been lucky enough to meet Alison at various events in the last few years, and to hear her read her work at the Flash Fiction Festival and other workshops. It was a delight to read her debut (I could hear her voice in every story) and my own review is at the end of this post.

Alison Woodhouse is a teacher, tutor and writer. Her short fiction has won a number of competition, including Flash 500, Hastings, HISSAC (both flash & short story), NFFD micro, Biffy50, Farnham, 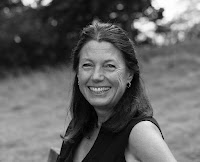 AdHoc micro (twice) and Limnisa and many others have been placed or shortlisted. Her stories are widely published both in print and online, including In the Kitchen (Dahlia Press), With One Eyes on the Cows (Bath flash fiction), Leicester Writes 2018 & 2020 (Dahlia Press), The Real Jazz Baby (Reflex), A Girl’s Guide go Fishing (Reflex), National Flash Fiction Day Anthologies and Life on the Margins (Scottish Arts Trust Story Awards). She is part of the team who run the Bath Short Story Award and has an MA in Creative Writing (Distinction) from Bath Spa. Her debut Novella in Flash, The House on the Corner, is published by AdHoc Fiction.

Set at the end of the eighties and early nineties, The House on The Corner traces the changes in the
lives of a middle-class nuclear family. As history unfolds outside the house, an ever-deepening crisis threatens the fragile, tenuous connections within.

Question: A novella-in-flash will be a new form to many readers. Can you tell us what makes this different from a collection of stories?

Hi Tracy, thank you for inviting me onto your blog. I’m not sure I can give a definitive answer as I’m still unravelling what a novella in flash is myself! There are as many styles and subjects as there are flash fictions! For me, I think it differs from a collection of flash stories because it tells one story, the unifying story, in tiny shards or fragments, leaving a lot of space for the reader to make the connections. Each flash contains a nugget whose whole meaning is revealed in conjunction with the rest of the pieces. Whilst each story does stand alone, the impact is greatly increased when they are read together. A collection of flash stories can share themes and even recurring characters, but they are not narratively interdependent and often you can dip in and out. My novella in flash (Nif) is about what happens next, the consequences of characters’ choices. It was a wonderful way for me to explore the family of four over a period of time and chart the changes that happen both within and without the house, moving freely between point of view and jumps in time. I especially enjoy the fracturing in a Nif, because it leaves so much unsaid, which I love in fiction. You really can show not tell! But I wouldn’t get too bogged down in trying to define exactly what it is. In the end, I wanted to try and get the weight and feel that a novel can give a reader, but in far fewer words and I hope the Nif worked!

Question: Can you tell us how The House on the Corner came to be written and then published? I’m interested to know if you always had a story arc in mind or if it evolved after writing several individual flash stories?

Bath Flash Fiction Award runs an annual Novella in Flash competition, which closes in January. I had read a few of the AdHoc Fiction Nifs and really enjoyed them. The ones that particularly stayed with me (How to Make a Window Snake by Charmaine Wilkinson, for instance, or Homing by Johanna Robinson) were novelistic in scope but so crafted and clever and memorable. The deadline for Bath was a week away when I had a coffee with a friend (Diane Simmons, author of An Inheritance and Finding a Way) and she suggested I entered. I’d started writing flash and entering competitions a couple of years ago and had a fair bit of success winning prizes etc but though I often write about family I didn’t think the flash I’d written had enough connections in terms of story, so the challenge was I’d have to write something new, minimum 6000 words in under a week (Note: maximum is 18,000 words and Alison's is 10,000 words in length). I do like a challenge! I’d been struggling for months with a novel set in the eighties and early nineties and had done lots of research about the impact of the Berlin Wall coming down and the end of the Cold War and all the seismic changes that happened in such a short time and I knew I wanted to set it in that period but wear the history lightly as the novel had got bogged down. Walking home I began to ‘see’ my family of characters and where they lived. I wrote the first story that evening, with the estate agent selling them the house, and then I was off! I wrote the whole thing in less than a week, giving myself a day to proofread. I can honestly say it was thrilling – the most writing fun I’ve ever had. I didn’t stop to look down, just leapt from story to story, keeping all the connections in my head. I think I said this somewhere else, but it was like weaving, or harmonising! To get back to your question (sorry!), there was an arc of sorts set by dates and the opening and closing stories, but the lives of the characters evolved as I wrote. The novella was Highly Commended, which meant it would be published, alongside the other six novellas. The official launch date is actually this Saturday 28th November. Michael Loveday, the judge, offered some excellent feedback prior to publication and I wrote two new stories for balance and strengthened the ending. I feel incredibly lucky, as I really enjoyed writing it, and Jeanette Sheppard (multi-talented author of Seventy Percent Water) painted me the most beautiful cover.

Note: Jeanette Sheppard recently featured on here to talk about her writing and art, you can read her interview here.

Question: What triggers or inspires a story for you? Can you share your writing process for short fiction?

Interesting question. I often ‘see’ a phrase, or a word, or a scene. Not exactly memory but just my mind wandering off then getting snagged on something. I also like prompts. Last year Adhoc had the word ‘mistake’ as their weekly competition prompt and I saw the first sentence of my flash, that went on to win (read it here); and the rest of the story flowed from that. My story that won Flash500, The Green Dress (read it here), came from an exercise to write about a loved object from childhood. It took me over two years to write that one, as in each subsequent rewrite I delved deeper into the complicated emotions around ‘love’. A lot of writing, for me, is rewriting and I think that’s particularly important in short fiction. In longer form you need the momentum to keep going and though you edit afterwards you can forgive undulations in the text. In a novel sometimes people just have to get from A to B. In short fiction every word matters, every resonance has to sound the intended note. That’s what I love about the rewrites. It’s about finding the sound and rhythms and perfect image for the emotion of the story.

Question: Can you tell us about your next writing project(s), what do you have in the pipeline?

I have several projects on the go. Firstly, a sequel to The House on the Corner, set a few years later. I don’t know if this is another Nif or not yet. It’s quite different to the first one as it is mainly the wife, Helen, at the moment. I also want to finish the novel I began on my MA two years ago, the one that got bogged down! Since writing the Nif I can approach it differently, so I think that writing experience was really important. I also have about a dozen short stories, quite a few of them prize winning and published, and I want to add more and try and get them published as a collection. And I always have a folder of flash I’m rewriting! In other news, but still writing related, I’m now offering a critique service for flash and short story via my website (alisonwoodhouse.com).

Question: Where can we buy a copy of The House on the Corner?

Thank you for asking! Signed copies are available from my website.

My review of THE HOUSE ON THE CORNER:
The House on the Corner is a novella-in-flash, taking us through eight years of one family’s life in 13 flash stories. Alison Woodhouse writes with such a delicate touch, exposing the heart of the King family with insight and understanding, yet the prose is never overdone or judgmental. This is small enough to be read in one sitting, but I’m glad I read it over several days, to savour and relish the unfolding story. When I finished, I immediately wanted to dive right back in at the beginning and wrap myself up in her writing. Each story can be read and enjoyed on its own, however together they build a complete and satisfying arc. I particularly loved how the opening and concluding stories dovetailed like a handshake, despite being set eight years apart. The recurrent details, such as the doorbell or the hamsters, were a joy to pick out and smile at.

The House on the Corner creaks with the melancholic sadness of unfulfilled lives; its stories echo with loneliness. This house is haunted by the living. The characters still linger with me, and my one final hope is that they all went on to find some happiness and contentment, if not together then at least for themselves.