It's not really about the money

After a lean couple of months suddenly in the last week prosperity showered the indoor writer.  Two cheques came in and she also learned a flash fiction story had won a book of short stories (for reaching the final 6 in Emerald Writing shortlist).  One cheque had been eagerly awaited - to date the biggest win of her writing career (both in monetary value and prestige) from Writing Magazine and the winning story is printed in November's issue (out this week).  This has certainly beefed up the bank account and provides funding for further competitions and writing projects.  The second cheque was 10,000% smaller but still marked a milestone in that it was payment for a small feature submitted on writing flash fiction - so the first ever payment for a non-fiction piece of work.  You have to start somewhere ...

Last week also saw a nine-way auction for M L Stedman's debut novel 'The Light Between Oceans', won by Transworld and Random House Australia.  Rather encouraging news for other hopeful novelists to see a debut novel attract such attention.  Good luck to M L Stedman - the book is planned to be published in hardback during 2012.  Click here to read more. 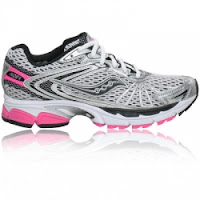 And so what did the indoor writer spend some of her winnings on?  New running shoes!  Heck the only time you'll see a pig running is when the trough's been topped up.