The annual AGM saw Nina Tucknott step down as reigning Chair for WSWC (West Sussex Writers' Club) with Sarah Palmer being elected as the new Chair.

Spotlight on Nina Tucknott:
Nina joined WSWC in 1996 and has been active on the committee in various posts since 1997. She was elected Chair in 2002 for a three year period and then made Club history by being elected again in 2007; this time keeping the post for four years. She has just stepped down (September 2011) but continues to produce the Club's 12 page monthly newsletter as Newsletter Editor.

Nina is a Swedish speaking Finn who moved to Sussex in 1981, and she readily admits that she wouldn't be able to write anything in Swedish anymore, bar the odd birthday card or email!

Still, the writing bug did start at an early age and no doubt her Swedish language teacher groaned at the pony stories she was regularly presented with. Amateur dramatics took over in mid to late teens and then life got in the way raising a family and being kept busy with that. When her two sons, Sebastian and Lucas, were in their early teens, Nina enrolled on a creative writing postal course and that kick started the creative writing flow again.

Nina has had hundreds of articles published - mainly on gardening and cookery - over the years and her short stories have featured in ten anthologies to date; her favourite short story genre being 'tale with a twist'. She has also been successful in various creative writing competitions and has taught creative writing in Brighton.

The first novel, after five years of slog is finished - a contemporary Brighton tale - although this hasn't been sent out anywhere as yet. Having completed a screenwriting course recently, most of Nina's time is now taken up with adapting the novel into a screenplay instead!


All of us at WSWC wish Nina continued success with her writing career and it's good to know she is still an active part of the club and Newsletter.  (Keep telling the jokes Nina!) 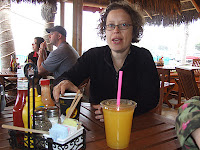 Spotlight on the new Chair, Sarah Palmer:
Members of West Sussex Writers' Club are an eclectic bunch. We have poets, scriptwriters, literary novelists, science fiction writers, saga writers, dramatists, creative writing tutors, children's writers, journalists and biographers – amongst others - in our midst. Many, but not all, are published. Some have a lifetime of writing experience, others are at the start of their writing career, and a few haven't written anything yet.

During my time as Chair, I want to build on what is at the heart of our constitution - a commitment to help writers in all genres, to encourage their work and offer help, if they want it, towards publication or gaining a wider readership.
My hope is that every meeting will offer something different, that there'll be plenty of airing and discussion of members' work and, above all, that everyone will leave a meeting having learned something about writing.
I'm also excited about our new collaborative project – a pantomime that will be performed as a rehearsed reading in December 2012, and that we'll be working on over the year. This is a great opportunity for everyone to work together in as large or small a way as they wish, but which I hope will get the Club writing as never before.
Sarah Palmer
October 2011
Posted by TracyFells at 01:51