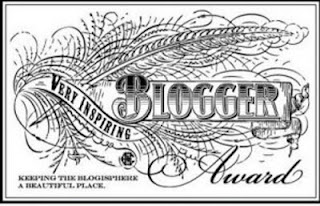 Thank you to the lovely Patsy for giving me this Inspiring Award. I have to squeal that the award is for my blog, but the Indoor Writer is hijacking the response and so here she goes (again) with 7 random facts of what has inspired her writing...

1. Several English teachers inspired me to write. My earliest memory of having a story read aloud in class was age 7 and from then on I declared I wanted to 'be a writer'. There was a couple of years during early teens when the ambition changed to 'international show jumper' (I went through a pony craze), but then reverted by the time I was off to uni.

2. At uni my Zoology studies didn't really inspire, so I wrote a novel in my second year. It was dreadful and remains handwritten (on lined A4), hidden away in a plastic crate in the loft. (Now if I was a true literary genius it would be locked in a trunk in the attic...)

3. Post uni I started a correspondence course for writing (you know the type: earn your fee blah blah), but never finished this as I met a nice bloke. And guess what - that bloke is now Handsome Hubby. Romance led to marriage and a baby... and the inspiration to write disintegrated for many years.

4. Hubby was seriously ill for several months and somehow this triggered the writing again. Wrote a short story, Hurricane Harry's Heir, during this period which later went on to be published in Five Stop Story Anthology. The original version was written 10 years ago... which demonstrates how you should NEVER throw any writing away.

5. Giving up my full time career in 2010 was another trigger to write. Suddenly my head was empty of work gunk and quickly flooded with story ideas. Since then I haven't stopped writing short stories.

6. Inspiration for stories comes from many sources but I find other people's writing often triggers new ideas. Reading, watching TV or listening to the radio can prompt a story theme or sometimes just a title, and oddly the rest of the story emerges later. A quality piece of writing stirs emotions and I hope one day I could write that well. When a book or film makes you think WOW I wish I could write like that, that is truly a moment of inspiration.

7. I find reading about writing actually prompts me to get on with it. LitPig is modelling below four of my particularly favourite inspirational books on writing:

Stephen King: On writing - full of his wisdom on the writing process and semi-autobiography. A rare page-turner of a how to book.

Simon Whaley: The Positively Productive Writer. Full of enthusiastic and encouraging tips, plus some nagging. I have put into operation several of his tracking systems (but then I was a control freak to start with).

Della Galton: How to write and sell short stories. It does what it says on the cover. This is one of several books that helped me to get that first Womag sale.

Noah Lukeman: The first five pages. You can read a review of this from a previous post here.


I'm passing this on to these inspirational bloggers: Simon, Helen, Della.